Reviewed by Erik Childress of the Chicago Film Society “Any Signal Sabrina Lloyd Gives You – Act On It!” 5 Stars (Awesome)

SCREENED AT THE 2008 PHILADELPHIA FILM FESTIVAL: A few movies over the years have attempted to give audiences the disorientation that comes with being blind. Most famously used in the theatrical and cinematic experience of Wait Until Dark, the blueprint for creating a sequence that masks its viewers in utter blackness while the movie continues. Normally it evolves during the course of a horror story to grasp us in the natural fear that arrives with the sudden realization that we’re unable to know when our sight will return. (Spielberg’s Night Gallery episode famously used it as the ironic punchline.) Filmmakers use it to see how far they can clock it before audiences become impatient or snicker-happy. Anything more than a few minutes and you don’t have a movie, you have a hearing test. So here comes Ana Calamia, jumping into the fray with her first picture and experimenting with the medium of another impairment. The characters of Universal Signs may have trouble seeing what’s right in front of them from time-to-time, but Andrew is unable to hear as well and this embracing story is told entirely through his ears.

Andrew’s (Anthony Natale) journey is indeed told through the perspective of a deaf man. No ambient noises. Dialogue is either filtered through sign language or the closed captioning made available for us sign-impaired. The only time Andrew apparently can hear sound is within his own dreams and aside from that the only collinear tonality comes from the harmonies of Joe Renzetti’s constant score. As a supervisor at work, Andrew’s no-nonsense demands of work-now/talk-later usually draw him scorn and mocking with hidden lips. This particular morning with a missing wallet has hardly brightened his mood but he soon gets into a friendly tech support exchange by e-mail with the college’s new librarian, Mary. When they meet face-to-face, Andrew is not only lucky enough to see that she resembles Sabrina Lloyd but that her own family has some deaf history and she’s pretty fluent in signing. So what if she occasionally mixes up “beer” with “bitch?”

Andrew and Mary have another chance encounter and strike up an obvious attraction to one another. Their first evening together doesn’t go quite as smoothly and Andrew continues to be haunted by the nightmares of a previous relationship with obvious tragic implications. After a brief bout at trying to keep Mary at a distance, he eventually opens his eyes to more than just the obvious perfections of her personality and communication skills and the pair begin a romance built upon the foundations of faith and forgiveness.

Two words like that may be scary enough to viewers worried that they’re about to be bombarded with some Mitch Albom/Nicholas Sparks gobbelygook. But while there is certainly an undercurrent involving Mary’s Sunday morning habits, it’s just one of the many naturalistic and unobtrusive aspects of the film that manages to avoid its potential gimmick trappings. Once you accept the manner in which Calamia tells her story, our immersion into it becomes so seamless that you may catch yourself occasionally ignoring the subtitles laid out for us and trying to directly read the lips of the characters.

There’s also something magical that occurs without calling obvious attention to itself when Universal Signs actually gets around to embracing its roots in the history of silent film. Developments in the plotting may give you the occasional eye roll for either their contrivance. But when you discover the big reveal during an Easter dinner scene, those versed in the schools of Chaplin or clavical-themed westerns will recognize the subtle shift in Renzetti’s score and provide new light on the direct convenience of an early antagonist and the second one it spawns. It’s not a far trip to imagine this dinner sequence with full title cards and speeded-up film in a full-on homage to the beginnings of motion pictures before we could all hear Al Jolson.

Calamia and Natale also couldn’t have found a better partner for Andrew than Sabrina Lloyd. Years ago after seeing the little indie, Dopamine, at the 2003 Sundance Film Festival I remember telling people that the way director Mark Decena framed her in some of those scene, Sabrina would be right at home as a silent film actress. Not because she had to over-sell grandiose emotions in some reverse Kuleshov Effect method but because her eyes and smile had the ability to tell a story all by themselves. Anyone who fancied her work as the sunny assistant on Sports Night knows she can sell the dialogue but in Universal Signs, she doesn’t miss a beat without it making it just as easy to fall for her the way we usually do for any cool, smart, funny girl that manifests in a Garden State, Juno or Once. This is precisely the kind of role that Sabrina Lloyd should be getting more of and it was great to see that same magic from Dopamine again.

(While unintentional I’m sure, there is a sort of bemused Dopamine swap going on with Lloyd’s character in Universal Signs. This time it was the guy that was damaged with memories of a “lost” person from his past, which he then loses himself in painting while Lloyd’s Mary hunts down his past on the internet and prints up pages for him to see. Apples and oranges and never a distraction, but I can’t also be the only one to appreciate the link of Margot Kidder playing Lloyd’s mom while twin sisters are running around the house.)

The underlying themes of communication never overburden the central connection we’re making along with Andrew and Mary. There’s subtlety in the pair of apologetic e-mails that are never sent, thus emphasizing society’s overreliance on mechanization over human contact. Calamia’s affection for both Modern Times and City Lights wisely become wedged in instead of inviting a direct and unfair comparison. The closing moments where the instrumental is finally joined by lyrics is a beautiful touch (with just the right song) in encapsulating Andrew and Mary’s romance and a perfect reminder that a well-timed word, whether spoken or unspoken can be all you need to fall in love. Just as you are likely to be by the end of Universal Signs.

Reviewed by Walter Kealey of the Philadelphia Film Society

Ann Calamia’s attention-grabbing drama tells the tale of a deaf man struggling to communicate with those around him as he grapples with the past and looks for love.

Through a unique combination of music and subtitles, Ann Calamia delivers a cinematic experience unlike anything you’ve ever seen. The film’s tagline, “Captioned for the Hearing,” doesn’t even begin to describe what the viewer is in store for. Andrew, a young computer tech worker, is trying to break out of a menial, day-to-day boredom of his job. He is deaf, and to express his way of perceiving the world, the film forces the viewer to experience the life as Andrew does: without the ability to hear anyone or anything in the film. Through his relationship with Mary, a coworker who knows sign language, he begins to move forward in life. This relationship, however, also forces him to deal with painful issues from his past that he will need to overcome before he can love again. The greatest strength in the film lies in its ability to present a classic story in an innovative and interesting way. Universal Signs will leave you with a warm feeling while also making you think twice about the way you communicate with those around. 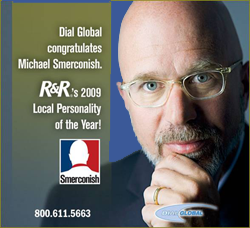 Michael Smerconish, the premiere talk radio host in Philadelphia, says, “I loved [Universal Signs]. I’m giving it 3 1/2 out of 4 Stars!” Ann Calamia, Universal Signs’ writer and director, was a guest on his show on May 28, 2009. There was lighthearted banter about the fact that Michael was Ann’s high school graduation speaker at Central Bucks High School West. Also, Ann shared with the audience that Universal Signs is a hopeful, uplifting story that embodies timeless wisdom and celebrates basic Judeo-Christian values like love, connection, and forgiveness.